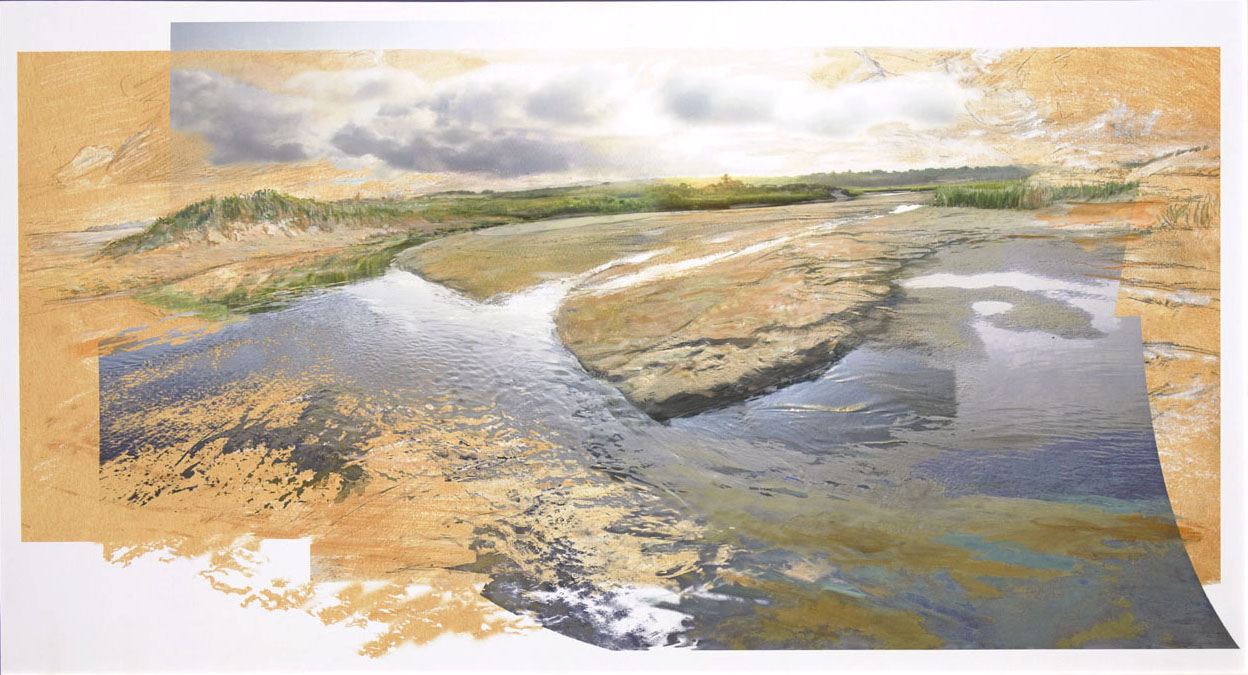 The motif for the Spindrift series, a morning view of the sand bars and tidal waters of Sag Harbor, Long Island, was a powerful scene. The bars had been sculpted like waves of sand, the early morning sun lit up the strong thin line of water between the two bars and every element seemed to be in flux. I stood in the middle of the water, looking down at the sand through the water that had the same ruffled shapes. It had been a long time since I had been at a seashore and the experience was invigorating.  I sketched the dune on the far shore at high tide and returned the next morning at low tide to stand in the middle of the water and sketch the sand bars thrusting forward in space and dissolving into water that filled the foreground. 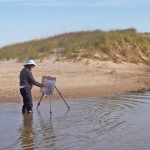 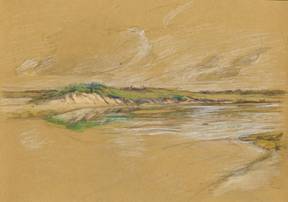 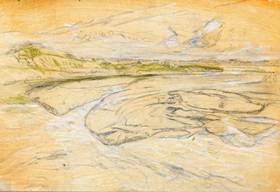 A full year elapsed between my initial sketches and the creation of the hybrid photography/painting series.  I had other commitments but also put off doing the larger version until I had a better idea of what I wanted to do. In August 2009 I looked over my sketches and photos and launched into several weeks of computer work to make the first draft of the image.

I first worked on a small version, Spindrift I, which I could create, print and then paint in the studio. The goal I had in mind (the “why” as opposed to the “how”) was to get that magical sense of layering of water, reflections and sand as well as the swirling sense of different experiences of the space – looking at the clouds, focusing on the distance, looking at the shore, then the water – and having it all fit together yet maintain some separation.

As one of the first steps, in Photoshop I combined the two drawings into one image:

I also combined several photographs, using some new software by DualAlign to stitch together the photographs from the scene.

Below is the combination of the “stitched” photographs and the drawing of the sandbars. The black is a by-product of the software, designed to be easily removed. Eventually I adjusted aspects of the photographs to the spatial structure of the drawing.

The two elements, the drawings and the photograph, were in different layers on the computer file and I could adjust them separately. With the photograph on top, whenever I erased a section of it, the drawing showed through. I started by eliminating the black shapes that were remnants of the stitching process as well as the white sky.  I then started erasing sections of the photograph by selecting similar colors with the photoshop selection tool, and then erasing only those sections. So by selecting a pattern of darks in the water to erase, those darks disappear and the drawing appears, the way that darkened water reveals the bottom of a stream. I then added clouds from a photograph taken at the same location and filled out the drawing layer so that it extended to the right side.

Along with other adjustments I smoothed some transitions and decided to replace the water just to the left of the center with a photograph that was more transparent and fit the flow better.

I made a few more adjustments, cleaned up the edges a bit and then printed it and started painting again. I worked mainly to get the water to dissolve into energetic paint strokes, weaving the blues and the sandy color. I introduced blue into the sand bar to emphasize the reflection of light and painted some areas in the center to establish the feel of paint.

Spindrift I    near completion:

The process for Spindrift II

After finishing Spindrift I (about two feet in length) I decided to make the 6 foot version that is in this exhibition. The process of making the much larger image required starting over with larger resolution scans of the underlying artwork. I also decided to try the higher resolution stitching of the i2K Align software, which generated a different composite photograph:

I wanted a more painterly middle section, so I inserted the central part of Spindrift I as another layer to work with:

I started the process of erasing through the layers to reveal the drawing more, meanwhile adjusting intensities of colors and other transitions. 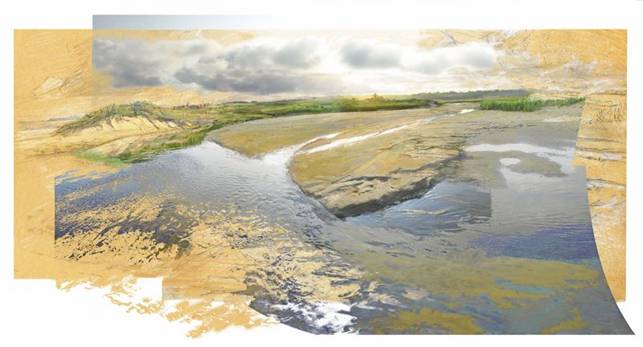 After the image was printed on canvas by Visual Winds Studio in Schenectady,  I painted with acrylics in sections to soften some shapes, bring out some colors, and introduce the physical presence of paint. 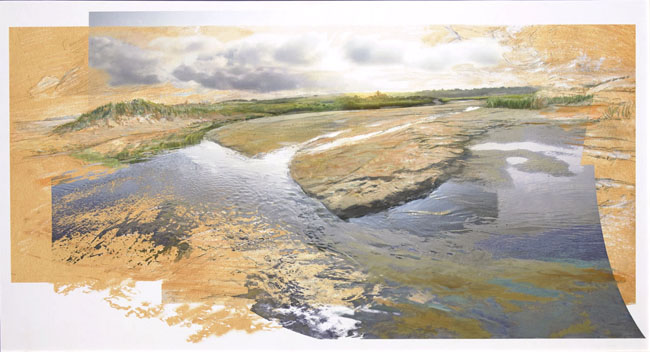 The title of the series comes from a stanza of Hart Crane’s poem  “Voyages”:

Bind us in time, O Seasons clear, and awe.

Bequeath us to no earthly shore until

Is answered in the vortex of our grave

Spindrift usually refers to spray, particularly to the spray blown from cresting waves during a gale. This spray, which “drifts” in the direction of the gale, is one of the characteristics of a wind speed of 8 Beaufort and higher at sea. Relatedly, spindrift can also be used to describe fine sand or snow that is blown off by the wind.