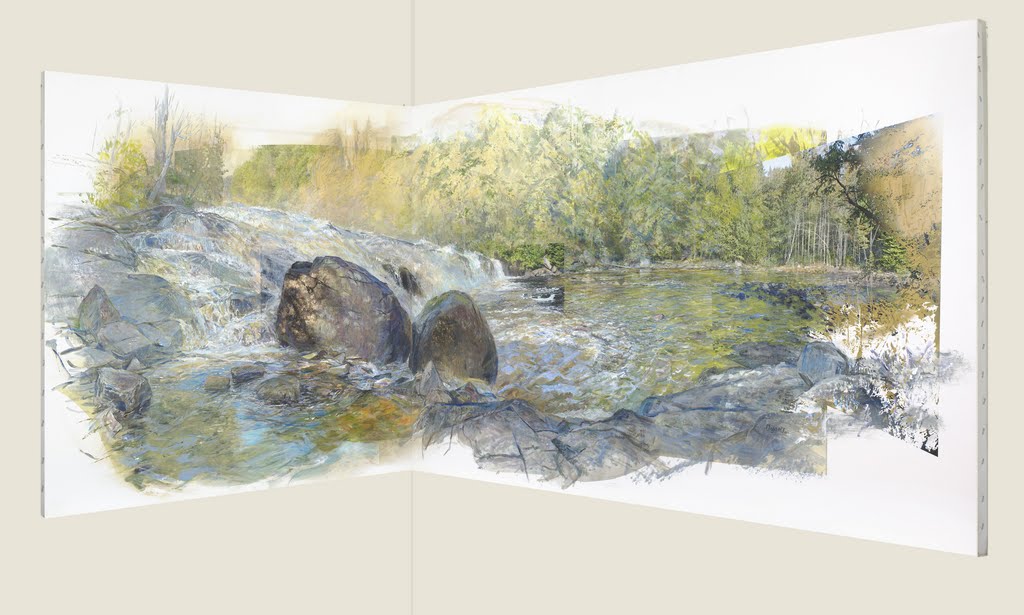 The general steps in  the hybrid process can be seen on the process page of this website, and it is illustrated using a small section of this complex piece. Use the menu link or  PROCESS

The basic idea for this artwork grew out of an interest in creating a new “corner piece” for the exhibition at The Hyde.  I had used a similar structure for two paintings back in the mid 90’s. The complex space at Buttermilk Falls, near Long Lake in the Adirondacks, offered a perfect motif. In July of 2013 I headed back to paint there during the early mornings of my week of being artist-in-residence at the Adirondack Museum in Blue Mountain Lake, where I painted on the grounds each day 11-3. For the preceding two summers during my residency I had painted from the base of the falls, looking upstream at the curtain of water. For my stint in 2013 I was planning on spending some time finishing the foregrounds of two works that are included in this exhibition,  Flat Out and Swimming Hole, as well as starting new works.

July 2013   I scouted out a new angle, at the edge of the main curtain of water where I could look up, across and down the river. On the first day the water was high and a quiet pool had filled up in front of the two boulders. And that calm amidst the torrent became an anchor for the space and a nice addition to the evocation of stages of life or the passage of time.  The cascade of trees on the far shore echoed the active water. 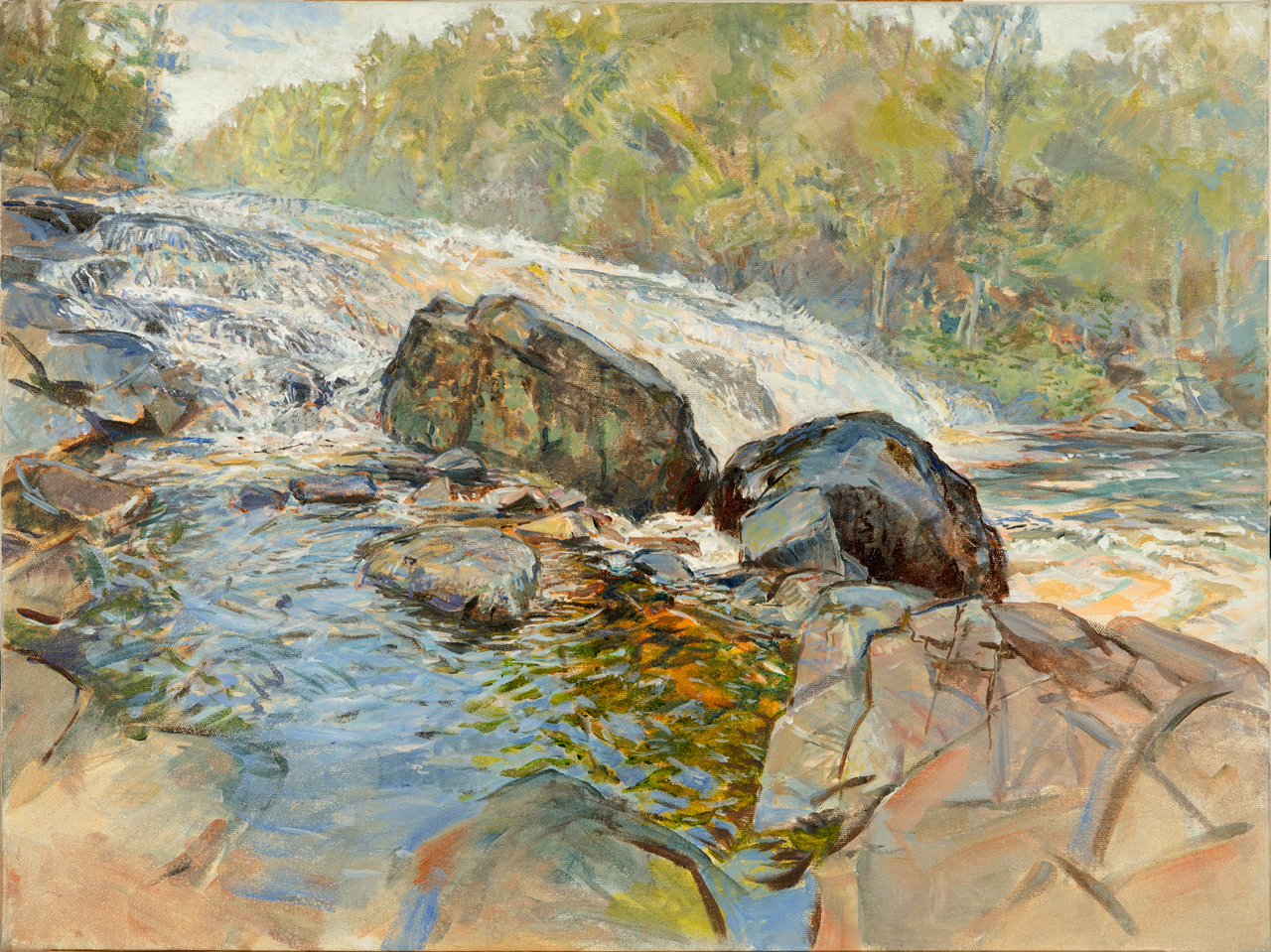 During that week while I was at Buttermilk Falls I also painted the very center part with the two boulders together. And I took several hundred photos of the wide scene and close-ups of many details. (untitled 2013, acrylic on canvas, 10×20″) 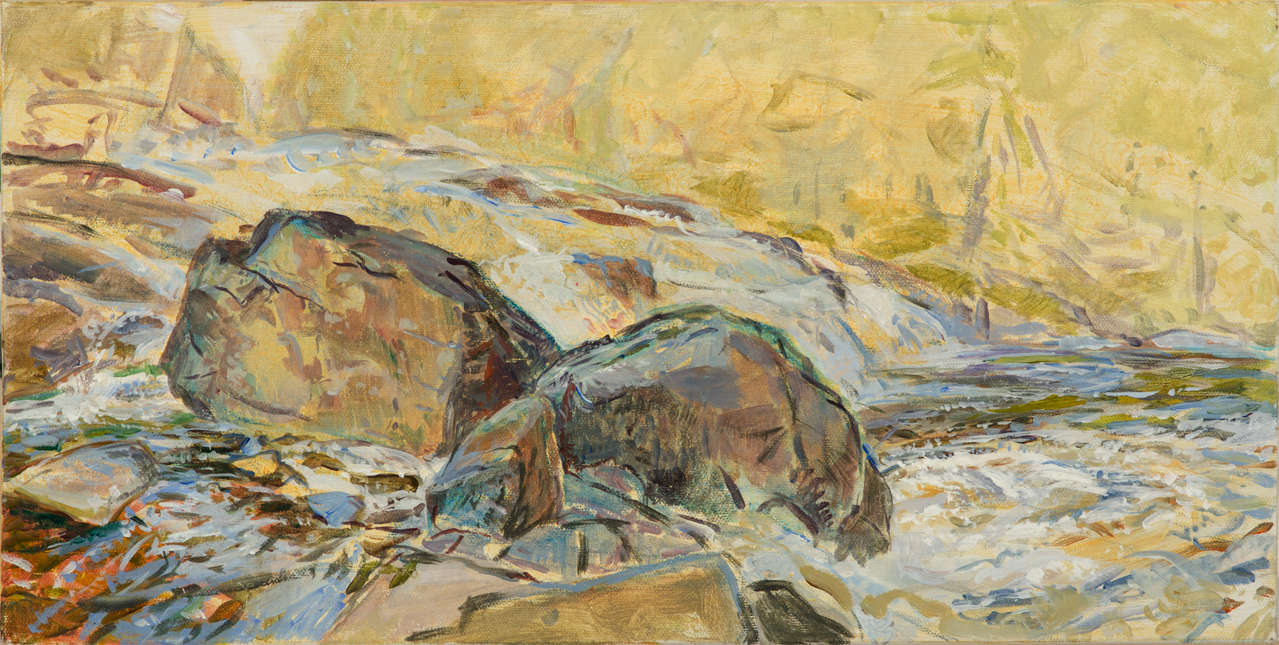 Aug 2013  I created several digital files combining photographs of the scene. The one here shows the empty pool due to lower water. 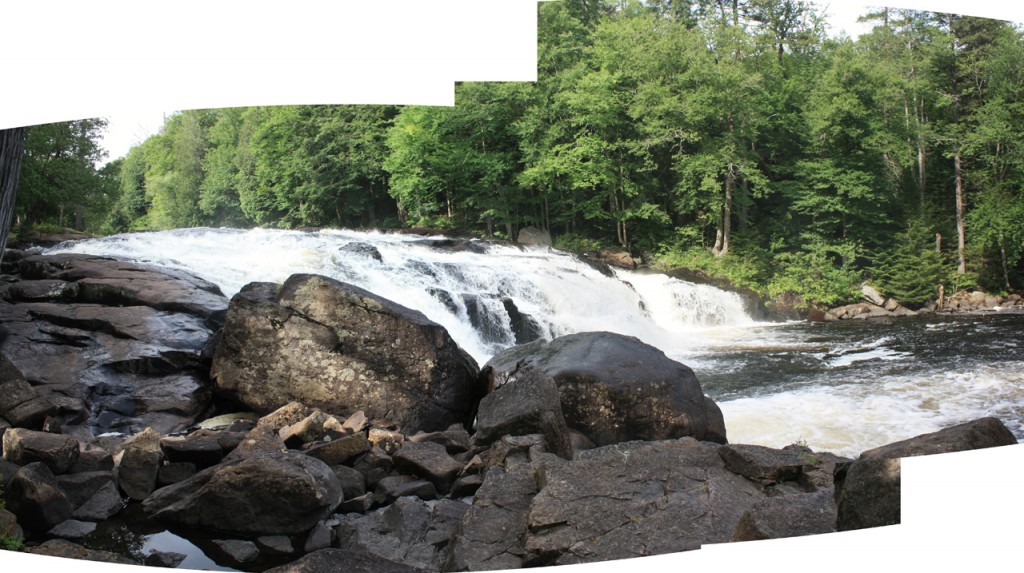 Below is the digital file I created with the additions of painting details and manipulation in Photoshop, inserting water where it had been dry in the photograph.

I printed up the file inexpensively in black and white, installed it full size in the corner, but was disappointed that it didn’t reach further to the right, wrapping around the viewer. 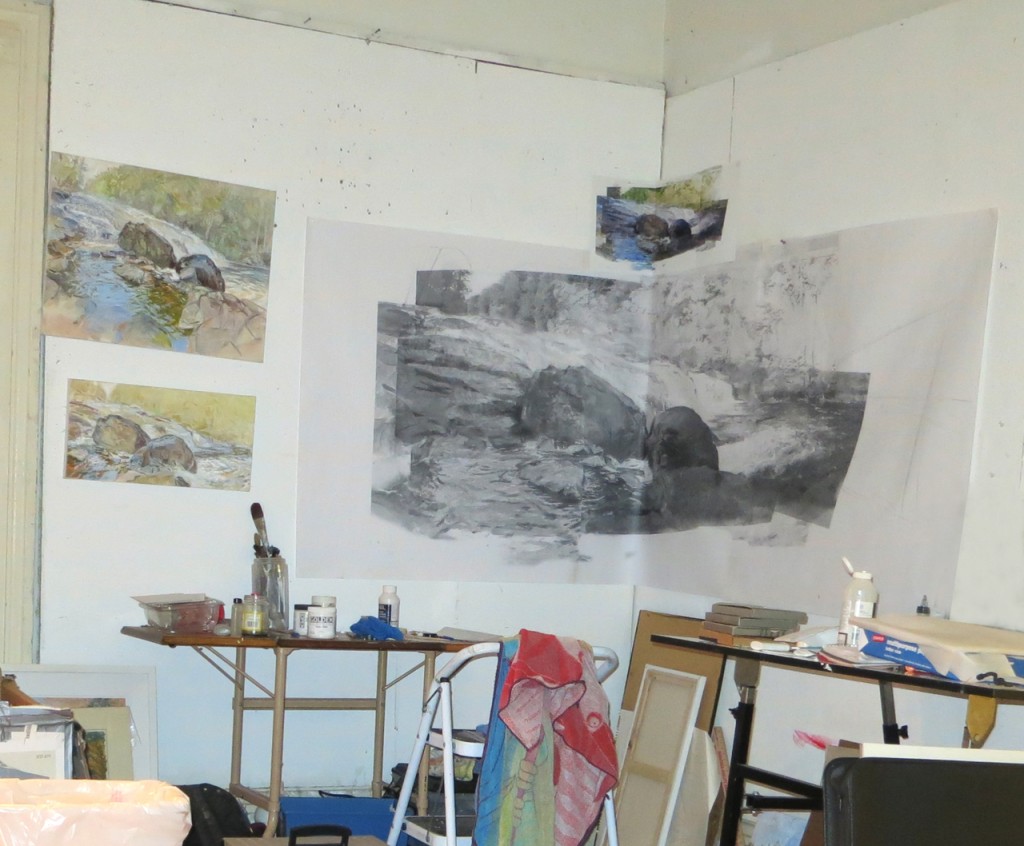 September 2013   To extend the right side of the artwork, I  returned to the falls to  work on details of the lower space, painting the turbulent flow below the falls stretching downstream. I took a lot more photographs and videos of the moving water. (untitled 2013, acrylic on canvas, 15×30″)

November 2013  While my hard drive with all my photos was out being examined after a catastrophic failure, and thinking I would have to start from scratch for the photographic elements, I returned on a very cold day to draw and take a new set of pictures (the summer photos were eventually recovered). Downstream, across the water, bare trees created linear patterns and marked the change of seasons. I inserted that segment in the final artwork, calling to mind the passage of time while introducing a curve to draw the eye back up stream. 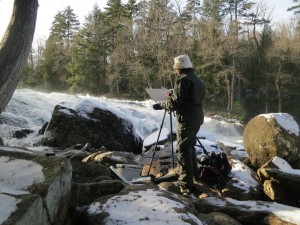 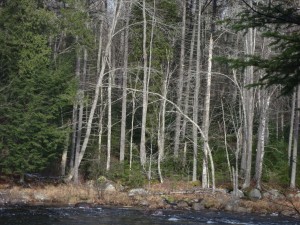 I worked on tan drawing paper, already folded where the painting would turn the corner and sketched out the space, eventually adding a second piece of paper to extend down stream more.

December – mid January 2014.  I worked on the final digital file of the full length. Many sections were left fairly plain in areas where I intended to do a lot of painting.

In the final artwork about 80% of the surface has been painted, adding and adjusting details. Presented as if on one wall: